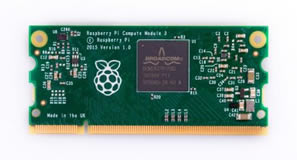 The Raspberry Pi Compute Module 3 (CM3) is a DDR2-SODIMM-mechanically-compatible System on Module (SoM) containing processor, memory, eMMC Flash and supporting power circuitry. The module allows a designer to leverage the Raspberry Pi hardware and software stack in their own custom systems and form factors. In addition the module has extra IO interfaces over and above what is available on the Raspberry Pi model A/B boards opening up more options for the designer.

The CM3 contains a BCM2837 processor (as used on the Raspberry Pi 3), 1GB LPDDR2 RAM and 4Gbytes eMMC Flash. Finally the CM3L product is the same as CM3 except the eMMC Flash is not fitted, and the SD/eMMC interface pins are available for the user to connect their own SD/eMMC device.

Note that the BCM2837 processor is an evolution of the BCM2835 processor (as used on the original Raspberry Pi and Raspberry Pi B+ models, as well as the first iteration of the Compute Module). The only real differences are that the BCM2837 can address more RAM (up to 1GB) and the ARM CPU complex has been upgraded from a single core ARM11 in BCM2835 to a Quad core Cortex A53 with dedicated 512KB L2 cache in BCM2837. All IO interfaces and peripherals stay the same and hence the two chips are largely software and hardware compatible.

The pinout of the CM3 is identical to that of the original Compute Module (CM1). Apart from the CPU upgrade and increase in RAM the other significant hardware differences to be aware of are that CM3 has grown from 30mm to 31mm in height, the VBAT supply can now draw significantly more power under heavy CPU load, and the HDMI HPD N 1V8 (GPIO46 1V8 on CM1) and EMMC EN N 1V8 (GPIO47 1V8 on CM1) are now driven from an IO expander rather than the processor. If a designer of a CM1 product has a suitably specified VBAT, can accomodate the extra 1mm module height increase and has followed the design rules with respect to GPIO46 1V8 and GPIO47 1V8 then a CM3 should work fine in a board designed for a CM1.